From November 8 to 14, K-pop stars, including Kyuhyun from Super Junior, A.C.E, and Dreamcatcher participate in the festival 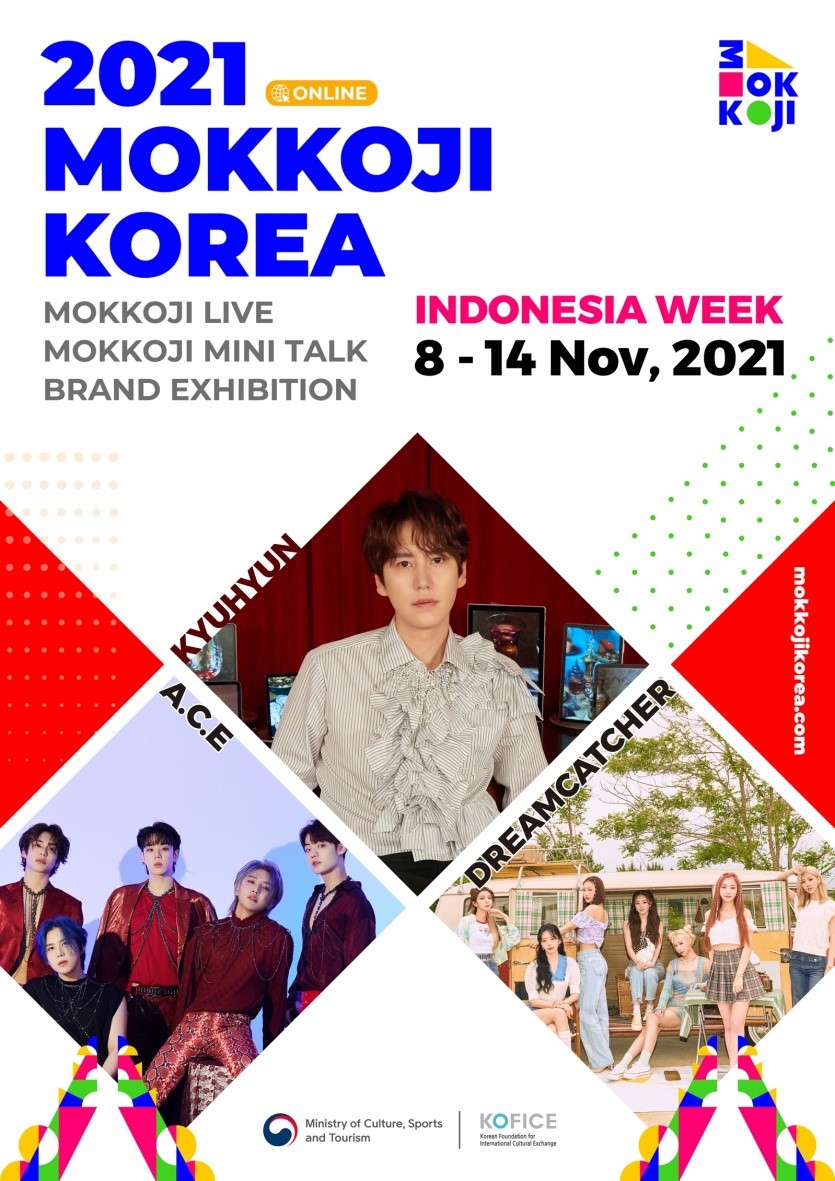 MOKKOJI KOREA debuted last year as a festival for exchanges of lifestyle and culture between Korea and the rest of the world, such as food, beauty, fashion and games.

* MOKKOJI means a gathering of people for games, parties and other occasions in Korean.

MOKKOJI KOREA selects Focus Countries each year to run MOKKOJI FESTIVAL. This year, Russia, India and Indonesia have been selected and they are feted each for a week of every month from September to November.

Indonesia is the last Focus Country of 2021 MOKKOJI KOREA. During Indonesia Week, MOKKOJI MINI TALK will be open at 4 pm (WIB) each day from November 8 to 13, featuring K-pop singers A.C.E and Dreamcatcher. On November 8, A.C.E will introduce Korea’s meal kit service, while cooking it themselves to let the appeal of Korean foods known to the fans. On the 10th, they will introduce Korean fashion trends, such as modern Hanbok and outdoor clothes, as well as trying on Indonesian traditional clothes, to experience the clothing culture of both countries.

On the 12th, Dreamcatcher will share how Koreans enjoy camping and communicate with Indonesian fans through YouTube live streaming.

MOKKOJI LIVE will be held at 4 pm (WIB) on November 14, the last day of Indonesian Week. Kyuhyun from Super Junior will join A.C.E and Dreamcatcher to communicate with their fans in real-time for three hours through video, including live performances and online fan meetings. On the day, K-pop idols will introduce snacks and travel experiences from Korea and Indonesia. Especially, Kyuhyun will draw much attention from fans by presenting Korean traditional games that have recently been a hot topic through the Netflix drama ‘Squid Game’. MOKKOJI LIVE can be watched free of charge on YouTube. And participation in the online fan meeting will be available by applying in advance on MOKKOJI KOREA’s official website from October 26 (Tuesday) to November 5 (Friday).

Meanwhile, MOKKOJI KOREA has unveiled its webtoon ‘The first spring with you’ through Line Webtoon Indonesia to mark Indonesia Week. The romantic story of a Russian girl studying in Korea releases a new episode every Wednesday and Saturday. The series is scheduled to end on November 13 (Saturday).

In addition, MOKKOJI KOREA provides a variety of content in Indonesian, such as a web drama ‘MOKKOJI KITCHEN’ and ‘K-LIFESTYLE WEBZINE’ to help Indonesian fans discover the latest information on Korean lifestyle and culture.

Visit 2021 MOKKOJI KOREA‘s official website (mokkojikorea.com) for its programs and schedules. The content is provided in Indonesian and English.