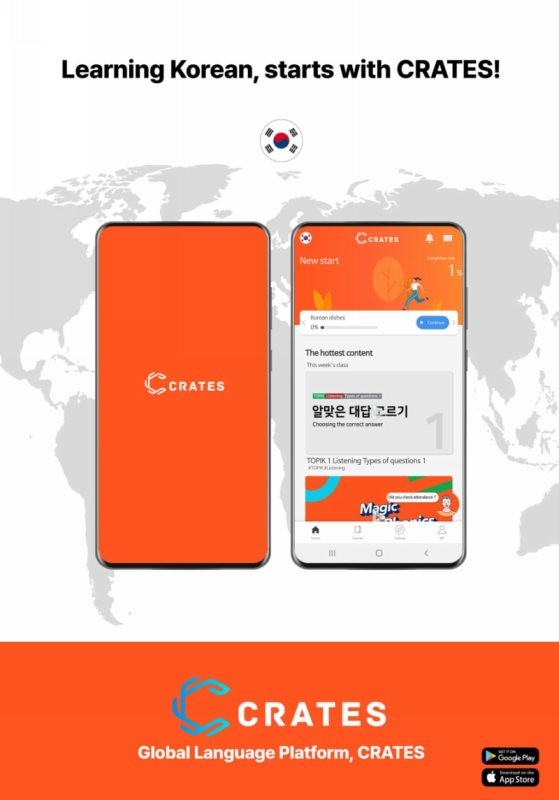 Korean content, Korean movies and Korean superstars are loved by people all over the world. With the trend, around 100 million of Hallyu fans are estimated to exist around the world, and as of October 2021, the number of Korean language learners in the U.S. and the U.K. increased by 40% and 76%, respectively, compared to the previous year.

The language platform ‘CRATES,’ which is being launched this time, is designed for Korean language learners. The current service languages are English, Chinese, Indonesian, and Vietnamese, so native speakers of these languages will find it easier to learn Korean. Starting with Korean, CRATES intends to expand into a global language platform in the future to learn English, Chinese, Japanese, Spanish, and Vietnamese.

Furthermore, by leveraging the strengths of the Korean language learning service planned and produced in Korea, Korean culture content that could not be found in other language services was made available for free to help people understand Korean culture in a simple and enjoyable way, and the contents have gone viral.

For more than a decade, CRATES has led the smart learning industry in Korea by launching the global language platform ‘CRATES.’ A Korea’s first subscription-based language learning app ‘MYPOOL’, its users can learn a total of five languages, including English, Spanish, Chinese, Japanese and Vietnamese at a reasonable price. With its merits, the MYPOOL received a lot of love from the users and led to a steady rate of use of the app by users. Based on this app development and operation ability, the global language platform ‘CRATES’ was created with huge efforts in the language education business.

CRATES means basket in Latin, and the company logo embodies a royal crown that symbolizes glory and victory. It is the aspiration to take the glory of containing languages from all over the world in the global language service called CRATES.

CRATES, a global language learning app that currently provides Korean language learning services in English, Chinese, Indonesian, and Vietnamese, can be used by downloading the app from the Play Store or App Store and registering as a member. Some content is provided free of charge so that you can think about using the service continuously. The monthly subscription fee of CRATES is $11.99, and the one-year subscription fee is $70, which is 50% or more discounted, so people around the world who are interested in Korean can learn at a reasonable price.