SEOUL, KOREA / October 24, 2021 / IMJ FOUNDATION will exhibit the media art “Circulation,” which combines ESG concepts, for two months from September to November at “Seongbuk-ro 167” in Seoul, South Korea. Moreover, “Seongbuk-ro 167”, where the art will be displayed, is an exhibition venue operated by the Foundation and features a space which combines media art and nature. The outdoor 4K LED SCREEN provides an artistic environment which actively applies the physical conditions of time and space by utilizing natural light during the day and a large media facade at night. 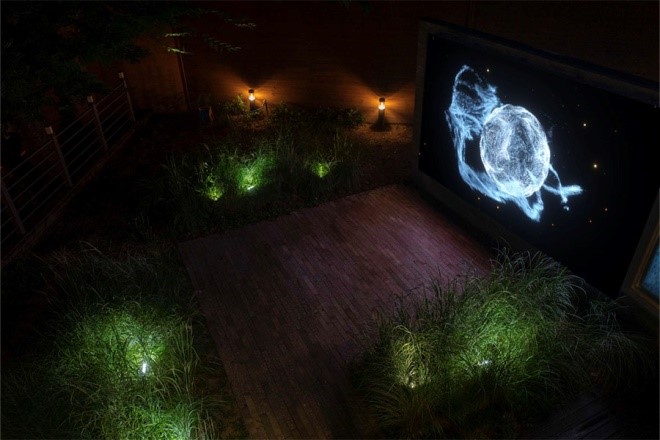 “Circulation” is a work that symbolizes the circulation of nature through a repeating video, which displays water, fire, soil, and air, which are four elements of nature. The scorching sun rising above the ground and the wavy blue grass refer to the birth of life. The water and wind depict the continuation of life, and while the Big Bang of the sun may mean the end of all, the sun rising again conveys the beginning of an immortal cycle. It also symbolizes the circulation of nature and at the same time, symbolizes human history and individual life. It also expresses a life where humans cannot always be lonely nor happy as much as honor comes with patience. As such, “Circulation” expresses the inevitable relationship between humans and nature in the form of a media artwork which implies the circulation of humans and nature.

The ‘IMJ FOUNDATION x CHELSEA FC Official Supporters Club South Korea Art Project’, designed with the vision of integrating sports and art, was boosted with Chelsea Football Club being crowned as champions of the 2021 UEFA Champions League. The Blue’s representative color is also applied in the media art in commemoration of the victory. Chelsea beat Manchester City to become the Champions of Europe for the first time in 8 years – when they won the competition in 2012. Such a process where the silence and noise is in a continuous line is comparable to the course of nature. Moreover, the green grass and the sun rising above it reminds people of the “blue pitches” at Stamford Bridge and the footballs sliding across it which are symbolized by the color blue.

“Circulation” is one of the ESG ART projects promoted by IMJ FOUNDATION which announces the grand narrative of the foundation’s climate change project on the premise of a link between nature and humans. This is the first media art which includes an ESG structure, and can be viewed for two months from September to November at “Seongbuk-ro 167” in Seoul, South Korea.